Ishido - How to play?

The goal in Ishido is simply to achieve the highest possible score. However, it is best to know how to do this, and the best way to score points is to make figures known as four-ways. To put it another way, the moves that allow the player to make the highest scores is when one places a pawn in a square surrounded by four other pawns. Obviously, you can't put them in any position... On this page, I will try to explain as clearly as possible what the legal moves are, in order to allow you to quickly master the basics of this game. Please allow me to begin with the components of the interface. 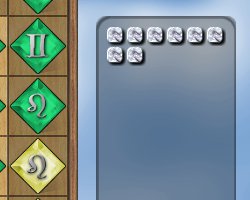 The game board is twelve squares on eight, and the squares on the borders are darker for a reason. Indeed, any pawn you will place on these squares will not be worth any point. We will come back to this later.

On the upper right, under the score and the number of four-ways lies the pile, which indicates the amount of pawns left to play. Placing all your pawns on the board, or almost all of them will award you an extra bonus, it is better to keep that in mind. 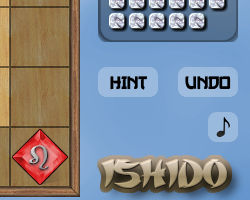 On the lower right, there are three buttons, each having its own function. The HINT button will show you all the legal moves, but will cost 10 points every time you use it. The UNDO button allows you to cancel your last move, not any further than the last one you made. Finally, the little button showing an eighth note allows you to change or hold the background music. 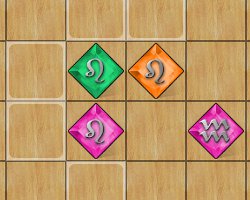 Also, when you click on the HINT button, the possible moves are shown like in the picture on the left. As you can see, the allowed squares are lined with a whiter square.

Your score and the number of four-ways you made is shown in the very upper right corner. I will now explain how to earn points.

How to give your score a boost?

The principle of this game is as follows; you begin each game with six pawns on the board, one in every corner and two on the center of the board. A pawn is then taken from the pile and you have to put it in a free square, besides a pawn with the same colour or the same symbol, or both if needed. Once you place a pawn on the board, another is taken from the pile, until either the pile is empty, or either you can't place the given pawn anywhere. 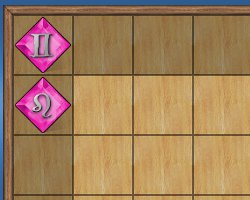 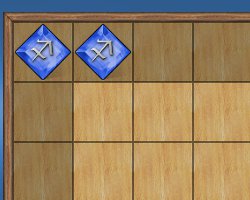 Whenever you place a pawn in any of the dark squares surrounding the game board, you do not earn any point, whether or not there are pawns in the adjacent squares. This kind of move never grants you any point.

The basic move consists in placing a pawn in an empty square besides which there is a pawn of the same colour, the same symbol or both at the same time. This move grants you 10 points, it is a 1-way. Usually, when you start a game, you rarely do better, it is not impossible however that the two central pawns allow you to make a 2-ways on the first move, when one has the same colour as your pawn, the other the same symbol. 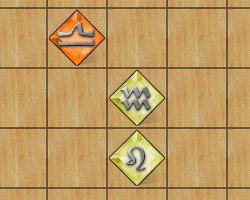 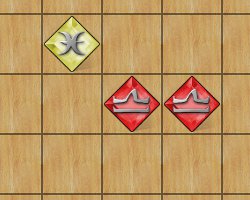 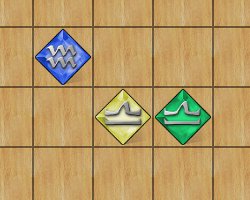 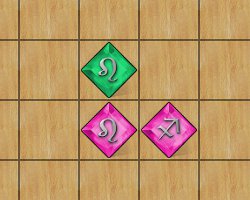 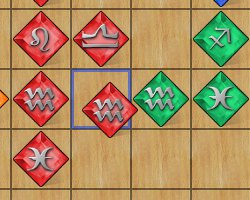 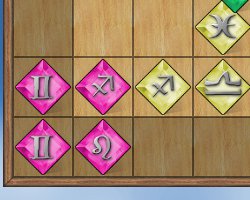 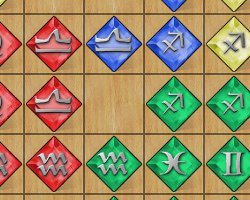 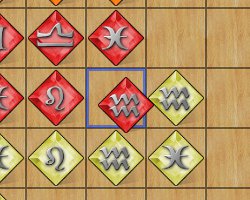 The ultimate combination is the 4-ways. It consists in placing a pawn between four others. To make a 4-ways, you will need two of the surrounding pawns to have the same colour and the two others the same symbol, no matter their position, as far as the required combination exists. It is the hardest move to play, however it is the most interesting one, because it is worth 100 points, plus a bonus that is increasing each time you make a 4-ways.

Here are the bonuses awarded every time you perform a 4-ways:

There... I hope all this will have made the game clearer. Never forget that only practice leads to mastery. And in case you need to cheer up, just remember that a score of 1000 points is already commendable... Have fun! :)