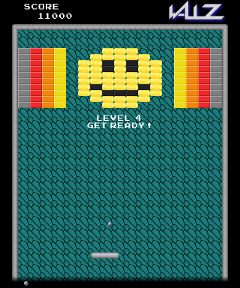 If you already knew the previous version of this website, please notice that Wallz' current version is still alpha 6 (or 0.7 if you like). Its development isn't discontinued but, for various reasons, it has been frozen for now. Yet, all hope isn't lost, and this version is actually already fully functional. I'm gonna shortly brief you about what it has to offer for now.

First, you play this game using your mouse, and occasionally a few keys. As I was saying on the previous page, this game contains 80 levels, and so far, nobody reached the end of the game. Maybe this will change, but at the time being, no one has seen the final screen neither received the million points bonus.

However, some players made their way to the top 100 which, as I said earlier, is stored online. It's still relatively easy to get in it, but if your goal is ranking number one, then you'll have a long road. 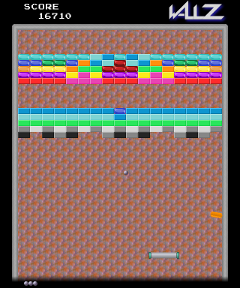 During your games, you will be able to grab all sorts of bonuses, there are 10 different ones, ranging from multiball to extra life, through missiles, ball slowers, bat shrinkers, expanders and more ! You'll quickly get used to it, but in case you want to know what it's about before kicking in, the Help menu accessible from the game's main menu will tell you which bonus has such effect, and it will also give you other informations such as how much you score for each brick you break, scores needed to get an extra life, the few hotkeys, as well as other miscellaneous things.

How much does it cost ?

It's free ! Actually, it's a donationware, in other words, it's absolutely free to play, but if you feel like giving me an euro or a dollar to cheer me up (or make me quit coding :D), it would be greatly welcome ! See how to proceed in the Help menu. Thanks in advance.

WARNING ! IF YOU PLACE THE GAME'S ICON ON YOUR DESKTOP, BE SURE IT IS A SHORTCUT, ELSE YOU WILL GET AN ERROR MESSAGE WHEN LAUNCHING THE GAME !